A downloadable game for Windows

In an old SALOON in the WILD WEST, a gunfight breaks out when a gambler is shot by a long-time debtor. The saloon-owner finds himself SHOT and bleeding on the ground.

At the moment of his death, he gets caught in a TIME LOOP and is forced to relive the day he died over and over again. Slip into the role of the almost dead bartender in this 3D FIRST PERSON ADVENTURE and manipulate the events of the day, so the fight never happens and you SURVIVE!

Use the INTERACTIVE ENVIRONMENT to influence the actions of the people in the saloon and observe the effect of your actions in the RESPONSIVE CUTSCENE that precedes the resetting of the time loop.

If you manage to achieve SOMETHING IMPORTANT that brings you a step closer to surviving, the time loop will remember it and it will ALREADY HAVE HAPPENED after the resets to come!

Dead Man's Day is a WINDOWS game for western enthusiasts at the age 12+ who love adventure games and OBSERVING their surroundings. It can be played with MOUSE AND KEYBOARD or with an XBOX CONTROLLER.

ENVIRONMENTAL CLUES AND ANIMATIONS INSTEAD OF DIALOG

RESPONSIVE CUTSCENE AFTER EACH DAY

Beautiful 3D menus that are fun to use

We are a team of 6 STUDENTS from the HOCHSCHULE DARMSTADT. 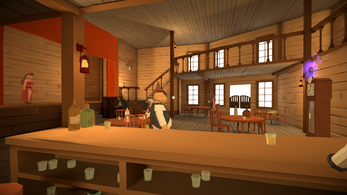